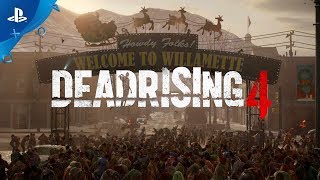 Previously known as an Xbox exclusive, Dead Rising 4 is the story of Frank West’s attempts to uncover the truth about a new strain of zombie outbreaks. Set in 2022, the story features the return of some old faces and introduces some new, pretty horrific, ones. Sound like your kind of thing? But you own a Playstation and not an Xbox? Then you’ll be happy to hear that as of December 5th 2017, the game will be released for PlayStation 4, along with all the downloadable content a